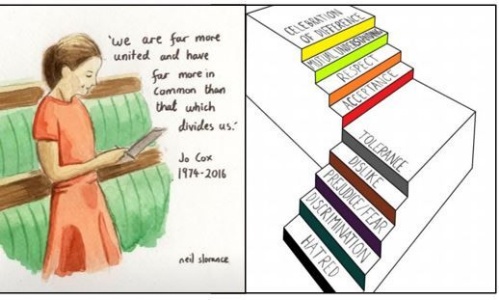 As I write this today, on Sunday 15th January, it is World Religion Day: a celebration of the many faiths in our world. The world population stands at over eight billion people, and of these, over six billion belong to a religious faith. (Incidentally, visit the fascinating WorldOMeter) for real time statistics on our population!)

As part of their wider personal development, this week in assemblies and in tutor time, we are celebrating World Religion Day, the aims that lie behind it and considering the part we all have to play.

The golden rule that links all religions is the age-old concept of ‘treat others as you would wish to be treated’ and we are urging our students to have this uppermost in their minds in all their interactions with others. To look at the extremes of what can happen when we do not do this, in assembly we are revisiting what happened to Jo Cox.

As you may remember, just over six years ago, and only twenty-seven miles away from our school, the devastating murder of Jo Cox, West Yorkshire MP for Batley and Spen took place. Her husband, Brendan Cox, afterwards blamed hate, not the murderer, for her death. For the murderer - who was heard to shout ‘this is for Britain’ - he said, he felt ‘only pity.’ The judge’s full words on sentencing are a compelling read. Judge's Comments BBC News

We ask our students, then, this week: How do we combat hate? Sharing with them the image of ‘the stairs of respect’ we are asking them to consider whether that key British value of mutual tolerance and respect is enough. As all good English teachers continuously ask their students to consider, what is the connotation of the word ‘tolerance’ – what do we associate with that word? All too often, tolerance can have connotations of putting up with something you do not like. At Bradfield School, we want to encourage our students to go further than tolerance; and turn the stairs towards   celebration of difference. This starts with an acceptance of difference. Treating others as you would like to be treated yourself really bring this step home.

We are far more united and have far more in common than that which divides us.

Jo Cox’s terrible murder is always remembered in parallel with the line in the subheading to this post from her maiden speech in Parliament. In this speech, she celebrated her own West Yorkshire diverse community, which she described as both ‘no nonsense and proud’ and ‘deeply enhanced by immigration’. This is surely just as true in our own city of Sheffield. We are therefore delighted to invite students to enter an art competition centred around Jo’s words, with the winning entries displayed around school. Students have until Tuesday 21st February to get their entries in, via form tutors, and can use the art facilities after school on Mondays and Wednesdays from 23rd January to support them. A huge thank you to Miss Waseem, one of our RE teachers, for facilitating this week’s assembly and tutor time discussions, for supervising in the art room and overseeing the competition.

As parents and carers, thank you for taking the time to continue these important discussions at home and reinforcing, as we know you will, the central message of treating others as you would like to be treated. The desire to always experience this in our own lives, is a key thing, of course, that unites us all.

Seyda Waseem Teacher of RE